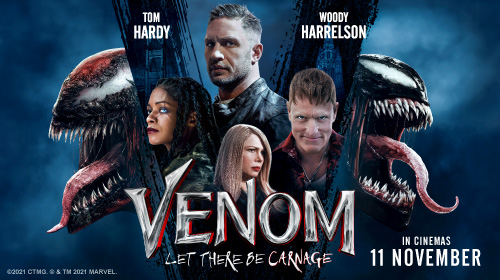 Who said alien and human couldn’t be best friend? Tom Hardy returns to the big screen as the lethal protector Venom, one of MARVEL’s greatest and most complex characters.

It’s one of a best anti-hero character movie. It’s yet simple and entertaining, showing the alien and human character of how they deal with each other. Tom Hardy returns to the big screen as the lethal protector Venom, one of MARVEL’s greatest and most complex characters. Eddie Brock(Tom Hardy) is very outstanding and every fight scene is so engagingly choreographed and tied in seamlessly with the special effects.

Reluctantly accepting his fate, Eddie Brock tries to co-exist with Venom. The chemistry between Eddie and Venom is what makes the film. Every time they are onscreen together, it’s created a lot of FUN! Venom has more of a personality this time around, and he looks a lot better too.

However, it’s a rocky relationship, to say the least. Eddie Brock also attempts to revive his career by interviewing Cletus Kasady, a serial killer who doesn’t trust anyone else. But things go wrong and Brock must quickly find a way to work with Venom and deal with the Carnage brought on by Kasady.

In this movie, they hit harder than the grandiose moments in which the giant black and red blobs hurl themselves at each other in mid-air. But don’t get too comfortable with the idea of a cuddly, cozy Venom. As the end credits remind us, there are always more movies in store.